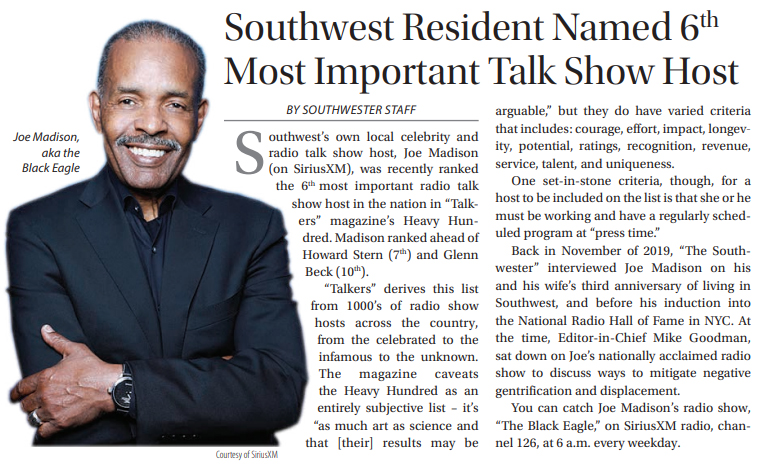 Southwest’s own local celebrity and radio talk show host, Joe Madison (on SiriusXM), was recently ranked the 6th most important radio talk show host in the nation in “Talkers” magazine’s Heavy Hundred. Madison ranked ahead of
Howard Stern (7th) and Glenn Beck (10th). “Talkers” derives this list from 1000’s of radio show hosts across the country, from the celebrated to the infamous to the unknown.

The magazine caveats the Heavy Hundred as an entirely subjective list – it’s “as much art as science and that [their] results may be arguable,” but they do have varied criteria that includes: courage, effort, impact, longevity, potential, ratings, recognition, revenue, service, talent, and uniqueness.

One set-in-stone criteria, though, for a host to be included on the list is that she or he must be working and have a regularly scheduled program at “press time.” Back in November of 2019, “The Southwester” interviewed Joe Madison on his and his wife’s third anniversary of living in Southwest, and before his induction into the National Radio Hall of Fame in NYC. At the time, Editor-in-Chief Mike Goodman, sat down on Joe’s nationally acclaimed radio
show to discuss ways to mitigate negative gentrification and displacement.

You can catch Joe Madison’s radio show,
“The Black Eagle,” on SiriusXM radio, channel 126, at 6 a.m. every weekday