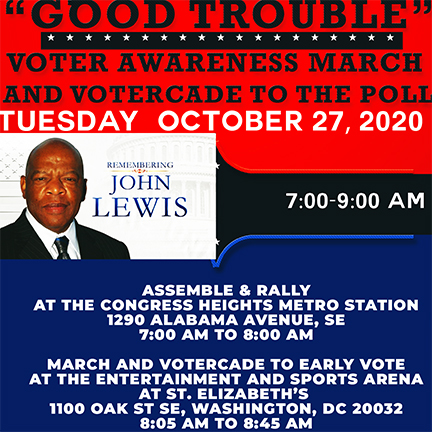 During what might be considered one of the most challenging times in the history of constitutional democracy, civilians are being asked to come together to raise awareness and celebrate the importance of voting. Future generations depend on us to educate and empower. It is ever more important for ALL of us who bear the burden of missed opportunities, hopelessness, and despair to become partners in raising awareness.

We are calling all the people of Washington, D.C., and surrounding areas to be part of the solution through exercising the right to vote. As we face these unprecedented challenges to our democracy and the right to vote in the Washington, D.C., this March and motorcade will urge all to be a part of the solution and join this Voter Education and outreach effort.
In the 1970s, John Lewis led the Voter Education Project, traveling throughout the South to register Black voters and help elect Black officials to office for the first time since Reconstruction. “Hands that pick cotton,” said the group’s slogan, “now can pick our public officials.” It is in his spirit and in honor of his legacy that we will gather on the first day of early voting.

This march will illustrate one way of coming together as a collective to utilize the power of the vote to promote equality, opportunity and justice. Join us as we work to educate our communities regarding voting rights.
Details:
When: Tuesday, October 27, 2020
Where: Rally will begin at the, Congress Heights Metro Station, 1290 Alabama Avenue, SE and end at the Early Voting site: Entertainment and Sports Arena located on the campus of St. Elizabeth’s Hospital, 1100 Oak Street, SE.
Schedule:
7:15 am Arrival
7:30 am Rally
8:00 am Caravan/March
8:30 am Violin Tribute to George Floyd
8:39 am Vote

Everyone is needed during a time when we can address an important aspect of our democracy – Voter Awareness. Marches have been held and more are already planned to be held all over the nation including Danville, VA; Richmond, VA; St. Louis, MO; Chicago, IL; Philadelphia, PA; Tallahassee, Florida; New Orleans, LA; Montgomery, Alabama; Detroit, Michigan; and many more cities. Please share in this groundbreaking event as we attempt to support community and enrich the lives of all in Washington, D.C. Education and awareness during these unprecedented times is crucial.