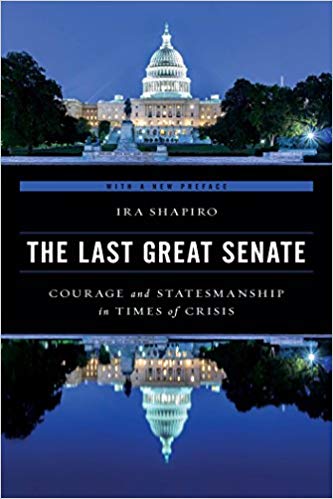 Courage and Statesmanship in Times of Crisis.

Journalists have called the U.S. Senate an empty chamber; politicians have lamented that the institution is broken—yet the Senate was once capable of greatness. Senators of the 1960s and ’70s overcame southern opposition to civil rights, passed Great Society legislation, and battled the executive branch on Vietnam, Watergate, and its abuses of power. The right’s sweep of the 1980 elections shattered that Senate, leaving a diminished institution in its wake.

Ira Shapiro spent 12 years working for Senators Gaylord Nelson, Abraham Ribicoff, Thomas Eagleton, Robert Byrd, and Jay Rockefeller. The Last Great Senate is his vivid portrait of the statesmen who helped steer America during the crisis years of the late 1970s, transcending partisanship and overcoming procedural roadblocks that have all but strangled the Senate since their departure. The Last Great Senate is necessary reading for all those who wonder how the Senate used to work and what happened to the world’s greatest deliberative body.