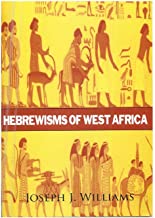 This book is a goldmine of information that uncovers Hebrewisms in African rituals and history all over Africa. It is also connected with some very recent research by antoher Amazon.com writer, Dr. Linda Thomas of Garrett Evangelical Theological Seminary. As an anthropologist/theologian, she studied water purification rituals among Africans in Uguleto, South Africa. These rituals are very close to those in the Old Testament. The content in Dr. Williams’ book further connects these types of rituals as they occur throughout the continent Africa. It is an amazing breakthrough in research.
I have used the contents of this book in many interesting ways. Just the other day, I was talking with an 80-year old woman at church, whose mother came from Madagascar, as a slave. I was able to share with her some of the information in the book about the Hebrewisms found in the Africans of Madagascar (some of whom were brought to South Africa as slaves by the Dutch). I was able to tell her that it may be possible that her ancestors might have descended from the ancient Black Jews of Canaan, who migrated down through Africa at various points in their history, and whose Jewish rituals were discovered by various historians at various periods. She is an African American. This is not the first time that I have presented this information in order to establish the fact that Jesus Christ, and the Jews of the Old Testament in many ways, were ancestors of the Africans who were brought here, from all over the continent of Africa as slaves.
It should be in the collection of every researcher into the history of Africans on the continent and throughout the Diaspora.

Until I Am Free

I Thought I Was Going Crazy

Author, Darryl Webster, shares an intimate reflection of his time growing up poor in a rough neighborhood. It’s a portrayal of a sensitive soul “an Orchid Child,” born into a chaotic world of social stressors.