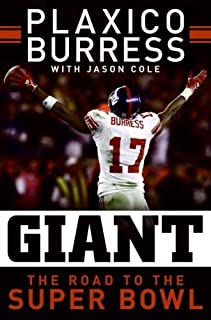 In Giant, Plaxico Burress takes you into the locker room, onto the practice field, and into the huddle, providing a flat-out-honest look at life on and off the field with the New York Giants and at the making of a champion.

Throughout the 2007 season, Plaxico battled near-crippling injuries, and despite rarely practicing, being heavily bandaged, and on serious painkillers, he led the New York Giants in receptions, yards, and touchdowns. He continued to play through pain in the playoffs, only to be further injured before Super Bowl XLII. Playing the arrogant Patriots—who were inviting the Giants to their victory party before the game was over—Plaxico concealed a significant injury that might have changed the outcome of the game if the Pats had known.

When he first joined the Giants, Plaxico expected to be the go-to guy for the young quarterback Eli Manning. What he didn’t expect was the media and fan scrutiny that was heaped on Manning as they battled to win games.

What Plaxico also didn’t expect was the difficult relationship he had with head coach Tom Coughlin, who was a stickler for discipline and who would fine players for even the mildest offenses. For five years Plaxico had played for the laid-back Bill Cowher and the Pittsburgh Steelers. In contrast, within weeks of joining the Giants, Plaxico and Coughlin were butting heads, and the fines followed.

But there to make things a little easier were friends like Jeremy Shockey and Amani Toomer, nearly polar opposites. With Shock, everything was always full-tilt and his mouth would usually get him into trouble. Toomer was the easygoing elder statesman—at times absentminded, but a brilliant receiver.

And in 2007, Manning, with Plaxico’s advice and support, would rise above the scrutinizing media and come into his own, and Coach Coughlin would relax his grip somewhat and let the team breathe. The results were obvious.

It’s all here. The ups and downs, the trash-talking, the sweat and blood, and what it takes to be the best.