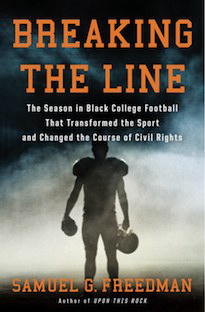 In September 1967, after three years of landmark civil rights laws and three months of devastating urban riots, the football season began at Louisiana’s Grambling College and Florida A&M. The teams were led by two extraordinary coaches, Eddie Robinson and Jake Gaither, and they featured the best quarterbacks ever at each school, James Harris and Ken Riley.

Breaking the Line brings to life the historic saga of the battle for the 1967 black college championship, culminating in a riveting, excruciatingly close contest. Samuel G. Freedman traces the rise of these four leaders and their teammates as they storm through the season. Together they helped compel the segre­gated colleges of the South to integrate their teams and redefined who could play quarterback in the NFL, who could be a head coach, and who could run a franchise as general manager.

In Breaking the Line, Freedman brilliantly tells this suspenseful story of character and talent as he takes us from locker room to state capitol, from embattled campus to packed stadium. He captures a pivotal time in American sport and society, filling a missing and crucial chapter in the movement for civil rights.