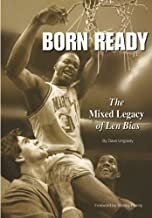 After the Boston Celtics made University of Maryland basketball star Len Bias the second pick in the 1986 NBA draft on June 17, the player’s future lay in front of him like a golden, red carpet leading to a life of good-fortuned fame. The Celtics and others considered him to be the next great basketball star, following Larry Bird and Magic Johnson, at a time when the team returned to league supremacy and Michael Jordan had yet to establish his ultimate greatness. Bias played with a rare mix of athleticism, grace and controlled rage. Off the court, he was humble and personable, shy and at times socially adventurous and daring. But Bias’ death from cocaine intoxication two days after the draft altered the state of sports and drugs in a way that lingers today. The player’s death was one of the cruelest tragedies in sports in the last quarter century. It still strikes the hearts and minds of many in a generation that witnessed the uncomfortable and developing synergy of big time sports and drug abuse. I tried to humanize the story by focusing on how lives have been affected by his death and the compelling issues that have arisen from the tragedy. The book provides an underlying message of overcoming tragedy to thrive and, in some cases, just to survive, in life. Bias’s death forced American lawmakers to make tough choices about how to best deal with a developing drug crisis, with dubious consequences. It reinforced efforts by those in charge of administering college athletics to alter the way they guided student athletes. And Bias’ death drastically changed the destinies of many who were closely connected to the athlete. The book includes interviews with Bias’s team-mates and close friends; former University of Maryland athletics officials who reflect on the challenging years that followed his death; people who were greatly affected by federal drugs laws; and even a young man who claims to be his son. I talked with his mother as well. As a former University of Maryland athlete (track and field and soccer) and a long-time Washington, D.C.-based journalist, I approached this project with passion and a unique perspective. I reported on Bias’ death in 1986 as a community broadcaster while also working at the Washington Post. This is my third book on athletics history at the University of Maryland, where I was a two sport athlete in track and field in soccer. I was captain of the track team in 1979-80. Go to daveungrady.com for more information.